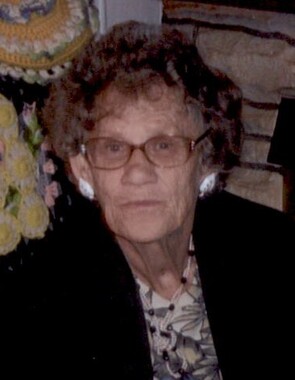 Back to Wanda's story

Wanda Messer Berry, 84, of Johns Run, KY went to be with her Lord on Sunday, January 12, 2020 at her residence. She was born May 24, 1935 at Grayson a daughter of the late Charlie and Hattie Travis Messer. Wanda was formerly employed with the Johns Run Post Office, Woods Grocery at Hitchins and Bays General Store. She attended the Johns Run Tabernacle. Wanda was preceded in death by her husband of 63 years, Virgil Lee Berry; six brothers, Johnny, Edgel, Delmar, Elmer, Estill and Ernest Messer; and one sister, Agnes Kretzer. Her survivors include one daughter, Carolyn (Clarence Rick) Hay of Johns Run; one granddaughter, Patricia Hanshaw of Olive Hill, KY; two grandsons, Richard (Brandi) Steele of Olive Hill and Derrick Hay of Johns Run; four great-grandchildren, Tyler, Brooklyn, Hailyn and Allison; two sisters, Carrie Baker of Obetz, OH and Ruby (Roy) Salyers of Grayson; two sisters-in-law, Geneva Messer of Obetz and Barbara Cooper of Rush, KY. The funeral service for Wanda will be conducted on Wednesday, January 15, 2020 at 1:00 p.m. at the Malone Funeral Home with Delmar Rogers, officiating. Interment will be in the East Carter County Memory Gardens. The visitation will be held Tuesday, January 14th from 6:00-9:00 p.m. and Wednesday, January 15th from 9:00 a.m. until the service at Malone Funeral Home. Condolences may be sent to the family at www.malonefuneralhome.com
Published on January 13, 2020
To send flowers to the family of Wanda Messer Berry, please visit Tribute Store.

Send flowers
in memory of Wanda

A place to share condolences and memories.
The guestbook expires on April 12, 2020.