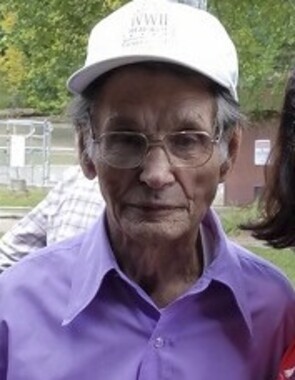 Back to Owen's story

Owen Henry Meenach, 94, of Grayson went to be with his Lord on Friday, November 1, 2019 in Kings Daughters Medical Center. Owen was born March 7, 1925 in Carter County, KY, a son of the late Oscar and Kate Gee Meenach. He was a retired Boilermaker Local 667, a farmer, served his country in the Navy during WWII where he was involved in the battle of Iwo Jima and a member of the Gilbert Chapel Church. He was preceded in death by two sisters; Jewell Shears and Virginia James; four brothers, Everett, Charlie, John and Verlin "Bud" Meenach. He is survived by his wife of 70 years, Frances Stapleton Meenach; two sons, Norman (Faye) Meenach of Grayson and Danny (Susan) Meenach of Maysville, KY; one daughter, Debra (C.T.) Lamblin of Danville, KY; one brother, James Landis Meenach of Reynoldsburg, OH; seven grandchildren, Dale Meenach, Steven Meenach, Matthew Meenach, Christopher Abner, Lauren Abner, Ashley Lamblin and Taylor Lamblin and eight great-grandchildren.
Condolences and memories may be shared with the family at www.malonefuneralhome.com.
Published on November 4, 2019
To plant a tree in memory of Owen Henry Meenach, please visit Tribute Store.

Plant a tree in memory
of Owen

A place to share condolences and memories.
The guestbook expires on February 02, 2020.