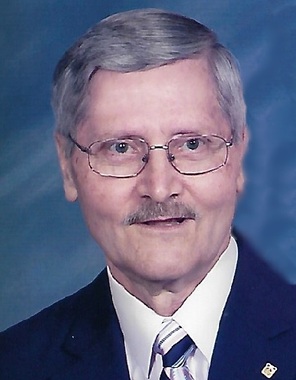 Mr. John Curtis "Johnny" Bush, age 88, went to be with his Lord and Savior Saturday morning, December 7, 2019, at his residence, with his loving family by his side following a long illness.

Following his graduation from Wurtland High School, Johnny served in the United States Air Force during the Korean War. After his tour of duty, he completed a B.S. at Morehead State University. Johnny faithfully served the community of Grayson as part-owner/manager at the Ben Franklin Store for 18 years, owner of Western Auto and Tots & Teens stores for 14 years, office manager for Dr. Tim Brammell for four years and employee of the Commercial Bank for five years. Following his retirement in 1996, he spent many of his days babysitting his grandchildren and attending their various activities.

Johnny was also whole-heartedly devoted to serving his Lord and Savior, Jesus Christ at the Pactolus United Methodist Church. He served as Sunday School Superintendent for over 30 years, taught children's Sunday School, led Youth Group, sang in the choir and duets with his wife and directed countless Christmas plays.

In addition to his parents, he was preceded in death by one infant son, Jeremy Bush; one brother, Elton Bush; and one sister, Thelma Opal Riffe.

Johnny was dedicated to the Grayson Rotary Club where he served as Secretary/Treasurer for 34 years. The Rotary Club honored him for his service with the Paul Harris Fellow Award and having the mayor present him a key to the City of Grayson and declaring August 28, 2012, as Johnny Bush Day in the City of Grayson. He was also an active member of the Grayson Jaycees and was awarded the 2013 Chamber of Commerce Keystone Award.

He was the devoted husband to his wife of 59 years, Donna Brammell Bush; a loving father to three daughters, Johnda (Carl) Blevins of Grayson, Rebecca (Bryan) Greenhill of Grayson, Kentucky, and Kendra (Hans) Hahnenstein of Lexington; doting grandfather to Kyle (Kim), John Kerrick, Kara and Kaelan Blevins, Seth, Bryana and Shawn Greenhill, Hannah, Ashleigh, Isaac and Laci Hahnenstein; great-grandfather to John Shiloh and James Blevins; one brother, Elmer Bush of Alabama; and two sisters, Ann Bush of Greenup, Kentucky, and Darlene Criswell of Grayson. He also leaves many other family members and friends who will sadly miss him.

Funeral services will be held at 1:30 p.m. Sunday, December 15, 2019, at Grayson Funeral Home & Cremation Services in Grayson, with Reverend Tom Riffe officiating. Burial will follow in the Grayson Memorial Park in Grayson, with full military honors presented by the Kenova American Legion Post #93.

Condolences may be sent to the family at www.graysonfh.com.
Published on December 11, 2019
To plant a tree in memory of John Curtis "Johnny" Bush, please visit Tribute Store.

A place to share condolences and memories.
The guestbook expires on March 10, 2020.

Kimberly Johnson Whitt
Worked with John for several years. He was a wonderful person. Never heard him say anything negative about anyone. Enjoyed working beside him very much. Am so saddened to learn of his passing. My deepest condolences to Donna, his daughters, and family. Thoughts and prayers will be with all in these very sad days.
View all