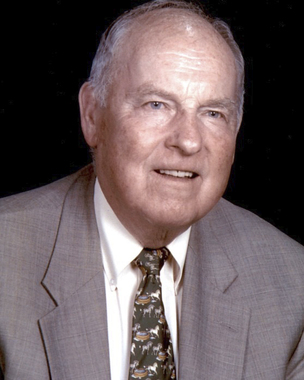 Everett Earl McGuire, 88, of Ashland, Kentucky passed away on December 7, 2019 at Woodland Oaks. E.E. was born on March 1, 1931 in Grayson, Kentucky, the son of the late Earl Raymond and Cleo Dell Fultz McGuire. He attended Prichard Grade School, Putnam Junior High and Ashland High School. A graduate of Kentucky Military Institute, Centre College and The United States Navy's Officer Candidate School. E.E. was a Lieutenant in the U.S. Navy during the Korean War. He was president of McGuire Motor Sales, past president of Ashland Finance Company and built Dock's Creek River Terminal during his early career. He was chairman of Logan Planing Mill. At his retirement, he was Chairman of First National Bank of Grayson and principal stockholder. He was a member, deacon and elder of First Christian Church in Ashland. E.E. was the first president of United Way of Carter County. He was a member of Bellefonte Country Club and the Elks for many years. E.E. loved to fly and was an instrument rated pilot. Survivors include his beloved wife of 65 years, Martha S. McGuire, sons J. Grant (Kheng Yap), C. Chad and daughter M. Dallas McGuire. He is survived by his grandchildren: Forrest (Alissa) and Loy McGuire, Kathryn Pierce (Joey), Martha E. McGuire, Weston Verner, and Derek Trumbo. Besides his parents, E.E. was preceded in death by his daughter Susan D. McGuire, sister Cleo Dell McGuire, brother Raymond McGuire and sister Helen McGuire Webb.
Funeral services will be held at Steen Funeral Home, Central Avenue Chapel on Wednesday, December 11, 2019 at 1:00pm by Dr. Robbie Phillips. Visitation will be Tuesday evening from 5 - 7 p.m. and from 12 Noon till service time Wednesday at the funeral home. His family thanks the dedicated staff at Woodland Oaks for their care of E.E.
Published on December 9, 2019
To plant a tree in memory of E.E. McGuire, please visit Tribute Store.

Plant a tree in memory
of E.E.

A place to share condolences and memories.
The guestbook expires on March 08, 2020.

Andrew justice sr
I'm sorry for your loss . praying for all the family and friends.i have a great momory of my parents buying their first car off of Mr mcGuire.
Jody Clowers
I managed Ashland Finance Co. in Mullens, W.Va. for 17 years and enjoyed my employment very much. E.E. was not only my boss, he was a great friend. I extend my condolences to his family.
View all